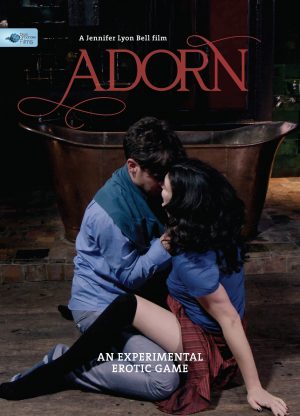 Starring Sadie Lune and Parker Marx, who have such enormous chemistry — and such fun —  that you can hardly believe this is their first time together.

Adorn is one of just a couple of Blue Artichoke Films that you can’t find on any other platform! We made it available just for our own special customers.

On our own site here, you can buy it in as a rental stream, a download, or as a 6-film package set with our other rental and download films!

Adorn has just become the first ever adult film to win the  Sex And Media Prize in the Netherlands. This prize is given by the national organization of sexologists to the one media creation that inspired the most positive change in public dialogue around sexuality. Read more about our award here.

Dubbed “The X-Rated Sundance,” CineKink features a carefully-curated program of films and videos that celebrate and explore the wide diversity of sexuality, with offerings drawn from both Hollywood and beyond. Works presented by CineKink range from documentary to drama, camp comedy to artsy experimental, mildly spicy to quite explicit — and everything in between.

Adorn is an official selection of all these film festivals, and more:

Looking for a live Adorn screening? Check our Events page to see if we’re coming to your town soon.

“They drive each other completely crazy before he slides into her for the first time…I could swear I could feel both Sadie’s and Parker’s excitement. That even his erection felt like mine.”

“The Grass Or The Ground”

Written and performed by Zoe Boekbinder

Director Jennifer has known Sadie Lune for years. American-born Sadie is a well-known performance artist,  sex worker activist, and film director on the Berlin arts scene. Jennifer met Parker in the bar of the Moviemento cinema in Berlin, and knew right away she wanted to work with him — though she didn’t yet have a project in mind. When casting for Adorn, she had an instinct that Sadie and Parker would be great together. And boy, were they! Jennifer is secretly very proud of her casting abilities, and grateful to Parker and Sadie for embracing this experimental, improvisational movie idea.

The gorgeous steampunk-ish Amsterdam location where Adorn was shot is also featured in the cult Netflix series Sense8. Sense8’s cast and crew –including producer Lana Wachowski — flew to Amsterdam to shoot multiple episodes in Amsterdam in Season 2. They happened to select the same “hidden” location as Adorn. The space is now called Mayer Manor, which hosts the organization Tenclub —  a salon-inspired cultural organization devoted to decadent events that pique curiosity.

Adorn : Behind the scenes

Behind the scenes photos